Ethiopia is teetering on the brink of civil war as fighting intensifies in the north of the country, sparking fears that its economic transformation could be stymied by protracted conflict.

Federal government forces loyal to Prime Minister Abiy Ahmed are making advances in the semi-autonomous northern Tigray region, which is currently controlled by the Tigray People’s Liberation Front (TPLF). The TPLF led a coalition which ruled Ethiopia for almost three decades prior to Abiy taking office in 2018.

On Friday, Human Rights Watch called on Tigray’s regional authorities and the national government to protect civilians and property amid reports of mounting casualties.

Abiy, who last year won a Nobel Peace Prize for his efforts to resolve a long-standing border conflict with neighboring Eritrea, tweeted on Sunday that the military campaign in the region to “uphold the rule of law” was “progressing well.”

“By advancing rule of law and holding accountable those that have been looting, destabilizing Ethiopia, we will lay the foundation for lasting peace & harmony,” Abiy said.

The prospect of a bloody and protracted conflict could dent Abiy’s recent push to transform the country’s economy.

Africa’s second-most populous nation has been one of the fastest growing economies in the world so far this century, consistently posting double-digit percentage annual growth in GDP (gross domestic product). However, in the wake of the coronavirus pandemic, the IMF has slashed Ethiopia’s 2020 growth forecast to 1.9% from 6.2% — and this was before the unfolding events in Tigray.

Risk consultancy EXX Africa has highlighted that the government’s Tigrayan offensive and its “perceived authoritarianism” was jeopardizing the country’s relations with key economic partners.

“Growing domestic and international criticism of the government’s crackdown on political opponents, journalists, activists, and business leaders is attracting the attention of some of Ethiopia’s key partners, such as the World Bank and International Monetary Fund (IMF), which is assisting the country in its response to the coronavirus and slowing economy,” EXX Africa Executive Director Robert Besseling said in a report last week.

“Foreign investors seeking to participate in Ethiopia’s privatization and liberalization drive will also be cautious of such human rights abuses and unilateral state actions, such as the suspension of internet service and closure of media networks.” 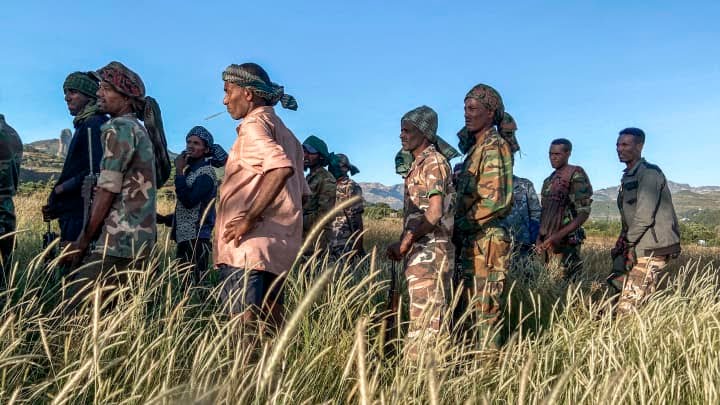 Amhara militia men, in combat alongside federal and regional forces against the northern region of Tigray, receive training in the outskirts of the village of Addis Zemen, north of Bahir Dar, Ethiopia, on November 10, 2020.EDUARDO SOTERAS/AFP via Getty Images

In addition, a growing focus from investors on ESG — or environmental, social and corporate governance — could mean additional overseas investment courted by the government remains on the sidelines, as reports of civilian casualties emerge from a region in which outside access and communication is mostly blocked.

“Human rights abuses will deter ESG-conscious investors at a time when Abiy is looking to attract foreign investment to drive his Homegrown Economic Reform agenda which aims to transform Ethiopia from an agrarian to an industrialized economy by 2030,” said Verisk Maplecroft Senior Africa Analyst Ed Hobey-Hamsher in a comment last week.

“The conflict will prove an expensive distraction from government efforts to address systemic poverty and food insecurity, exacerbated this year by the disruption that travel restrictions imposed in the wake of Covid-19 has had on agricultural production and markets.”

Both sides have sought to assert the moral high ground under international scrutiny since the government began military operations on Nov. 4, in what Abiy said was a response to an attack on a federal military base by the TPLF.

Reuters reported on Monday, citing military and diplomatic sources, that government forces had dropped bombs on the Tigrayan capital Mekelle.

It comes after Amnesty International said last week that “scores, likely hundreds” of civilians had been killed in the western part of Tigray, likely by TPLF personnel following defeat to government forces.

Each side has denied responsibility for various air and ground attacks, and accused the other of trying to destabilize the country.

Communications have been interrupted in the region since Nov. 4 as Abiy declared a six-month state of emergency, and access is blocked by road and air, making reports difficult to verify by international agencies. However, the UN Refugee Agency (UNHCR) now estimates that more than 25,000 displaced Ethiopians have arrived in neighboring Sudan.

“Tight restrictions on access for aid agencies and communications mean that millions of people in Tigray affected by the fighting may be at grave risk,” said Laetitia Bader, Horn of Africa director at Human Rights Watch.

Abiy has appeared to suggest in tweets that a swift resolution to the conflict could be possible. However, his resistance to ceasefire calls from the UN and various international powers have raised fears of a protracted conflict with a knock-on effect for the region.

“At this stage the prospect of a negotiated settlement or ceasefire does not appear promising, and the reported atrocities being committed in Tigray will only intensify the conflict – so will moves by the federal government to establish a parallel government for Tigray to replace the current TPLF-led administration,” said Louw Nel, political analyst at NKC African Economics.

“Concerns over neighboring Eritrea being drawn into the conflict are not unfounded; however, the governments of Ethiopia and Eritrea have been projecting an image of solidarity and commitment to the peace agreement concluded in 2018.”