The Lele people are a subgroup from the Kuba Kingdom of the Democratic Republic of Congo who originally resided along the Kasai River region. Due to the slash and burn agricultural system they practice, the Lele set up temporary villages as they move every ten to fifteen years.

Before the 1920s when the White administration had not been established, the Lele mostly engaged in fights with other groups over women. They did not quarrel with other tribes or raid other villages for anything apart from women. Any big debt or crime amongst them was also settled by handling over a woman. Hence, they were puzzled as to why men should kill each other for any other reason if women were not involved.

Unity is essential amongst the Lele because of the type of polyandry practised in the village. The Lele call it hohombe, or ngalababola, which means “wife of the village”. It is worth mentioning that one out of ten or so Lele women becomes a village wife. The rest are mostly in polygynous marriages. An anthropologist, Mary Douglas gave an in-depth understanding to who a village wife is amongst the Lele people. 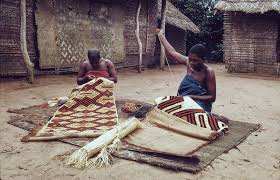 A village wife is either captured by force, seduced or taken as a refugee, or betrothed from infancy. She is initially married to several men in the village who may or may not have other wives already.

A Lele village wife. Credit: tripdownmemorylane
A village wife is treated with much honour and enjoys her honeymoon which lasts for a period of six months or more. She does not cook, draw water, cut firewood or do any of the usual work of women. If she wishes to go to the spring or to bring back some water, one of her husbands will declare that she must not carry the load and will accompany her, shouldering the calabash.

Moreover, a newly captured village wife can accompany the men on their hunting escapades, which is not allowed for an ordinary woman. This is mainly done to stop her from being recaptured to her original village. She does not eat vegetables as her devoted husbands bring her squirrels and birds every day and the people’s delicacy, which is antelope’s liver is reserved for her.

As she does not cook, she eats the food sent to her husbands by their mothers or their wives. Men and women do not eat together but during her honeymoon, the village wife is able to eat with her husbands.

During this period, she sleeps with a different man in her hut every two nights but any man in the village is entitled to have relations with her during the day.

At the end of the honeymoon, she is allotted a limited number of husbands, sometimes as many as five. She lives with these men, cooks for them and has relations with them in her house. Although her husbands can claim damages from any man who sleeps with her in her hut, she is available to the rest of the village when she is outside her home.

With time, the village wife has the power to eliminate husbands from her household and may do so until she has two or three. This initiative may not always come from her. For instance, a man quarrels, or is jealous, or marries a wife who is jealous, and for these or similar reasons takes his belongings out of her house.