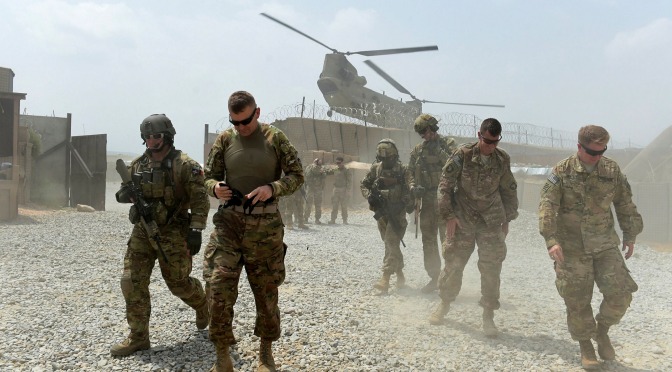 (Afrika-times.com) Just weeks ahead of the planned pullout of American troops, the American flag at the U.S. embassy in Kabul had been taken down and most embassy staff had been relocated to the city’s airport.  The chaotic reports emerging from Kabul cap more than two decades of American efforts in the country to root out terrorism and transform the nation into a functioning democratic state.

Thousands of American lives and nearly $830 billion in official spending, those efforts have resulted in failure.

How Afghanistan, a country that has been torn by conflict for decades, arrived at this place is a long and arduous journey.

Explained with maps and graphics  Here is a timeline of Afghanistan’s more late 20th century, what led to the U.S. invasion in the first place, through the most recent action there:

December 1979: Soviets invaded Afghanistan in order to prop up the government, which faced internal rebellion.

Early 1989: As the Soviet Union disintegrated, the army withdrew, leaving the Afghan forces to take the lead in fighting an American-funded insurgency. US intelligence estimates over 15,000 Soviet troops died in the decade-long war. The Soviets kept advisers with the Afghans and continued financing the military.

1992: The American CIA, which backed Afghan rebel groups, withdrew its aid. The Russians also cut its funding. The pro-Russian government was overthrown, and Afghanistan was plunged into a bloody civil war, setting the stage for the Taliban to assume power four years later.

1994: The Taliban, or “students” in the Pashto language, emerges from Islamist fighters in Pakistan and Afghanistan who fought against the Soviet invasion of Afghanistan for over a decade. That conflict ended in 1989.

1996: After a two-year civil war, most of Afghanistan comes under the control of the Taliban, who institute fundamentalist policies and widespread repression of human rights.

Aug 15 (Reuters) – Taliban insurgents began entering Kabul on Sunday after taking control of all of Afghanistan’s major cities apart from the capital.

Following are some of the major milestones in the Islamist militant movement’s advance in recent months. Other deadly attacks occurred, some blamed on the Taliban and some on other jihadist groups including an offshoot of Islamic State.

Talks between the Taliban and the Afghan government on a political understanding that could lead to a peace deal, backed by the United States and its allies, have failed to make significant progress.

– April 14 – President Joe Biden announces U.S. troops will withdraw from Afghanistan starting on May 1 and ending on Sept. 11, bringing America’s longest war to a close. It was an extension of the previous withdrawal deadline of May 1 agreed between the United States and the Taliban.Report ad

– May 4 – Taliban fighters launch a major offensive on Afghan forces in southern Helmand province. They also attack in at least six other provinces.

– May 11 – The Taliban capture Nerkh district just outside the capital Kabul as violence intensifies across the country.

– June 7 – Senior government officials say more than 150 Afghan soldiers are killed in 24 hours as fighting worsens. They add that fighting is raging in 26 of the country’s 34 provinces.

– June 22 – Taliban fighters launch a series of attacks in the north of the country, far from their traditional strongholds in the south. The UN envoy for Afghanistan says they have taken more than 50 of 370 districts.Report ad

– July 2 – American troops quietly pull out of their main military base in Afghanistan – Bagram Air Base, an hour’s drive from Kabul. It effectively ends U.S. involvement in the war.

– July 5 – The Taliban say they could present a written peace proposal to the Afghan government as soon as August.

– July 21 – Taliban insurgents control about a half of the country’s districts, according to the senior U.S. general, underlining the scale and speed of their advance.

– July 26 – The United Nations says nearly 2,400 Afghan civilians were killed or wounded in May and June in escalating violence, the highest number for those months since records started in 2009.

– Aug. 6 – Zaranj in the south of the country becomes the first provincial capital to fall to the Taliban in years. Many more are to follow in the ensuing days, including the prized city of Kunduz in the north.

– Aug. 13 – Four more provincial capitals fall in a day, including Kandahar, the country’s second city and spiritual home of the Taliban. In the west, another key city, Herat, is overrun and veteran commander Mohammad Ismail Khan, one of the leading fighters against the Taliban, is captured.

– Aug. 14 – The Taliban take the major northern city of Mazar-i-Sharif and, with little resistance, Pul-e-Alam, capital of Logar province just 70 km (40 miles) south of Kabul. The United States sends more troops to help evacuate its civilians from Kabul as Afghan President Ashraf Ghani says he is consulting with local and international partners

– Aug. 15 – The Taliban take the key eastern city of Jalalabad without a fight, effectively surrounding Kabul.

The latest news, analysis and investigations from Africa